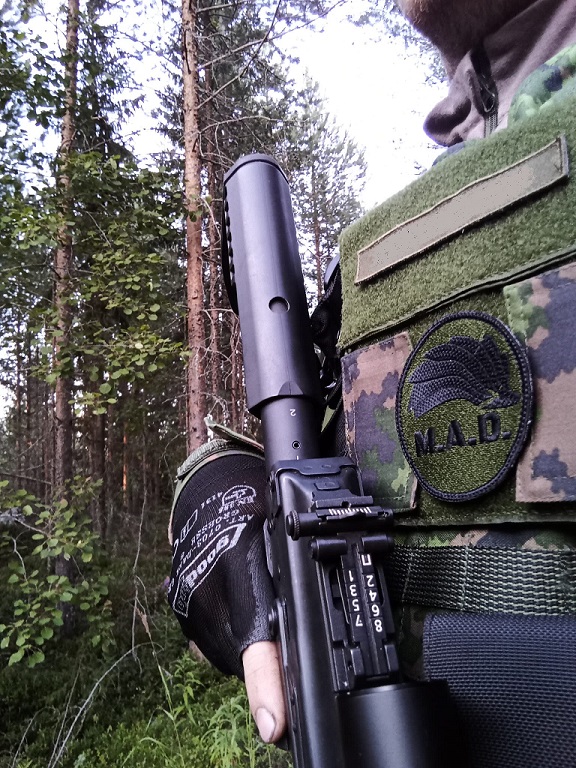 For a couple of days now there has been a constant movement of military personnel and vehicles in the Padasjoki region around EGTC camp site and the much disputed mining sites.
Vehicle convoys bearing a M.A.D. company insignia seem to be moving large quantities of troops and supplies to the EGTC camp site.
FreedomeFinlandPress have yet failed to receive any response from M.A.D. co or EGTC to our inquiries as to why their vehicles and staff seem to be stationing in the area.
All troops we have encountered seem to act friendly but decline to give any interviews.

The sudden increase of military presence in the area might also explain the last weeks odd sightings locals have reported to the authorities;
Locals have previously reported of someone sneaking around their properties and even seen “a person dressed like a bush”.
One such person was caught on some dashcam footage while running away.
FreedomeFinlandPress has not received any confirmations on that either if M.A.D. co has indeed been secretly mapping the area before arriving.

History
M.A.D. co is a Private Military Company formed by veterans of the previous Finnish Civil war between Pirkanmaa and Uusimaa.
Company provided work that matched peoples special skills learned during the war and gave place to many that had lost their families or dropped out of normal society during the war.

The Company
M.A.D. -abreviation comes from “Mechanised Assault Detachment” that originates from their huge fleet of military vehicles scoured from the disbanded military forces of the civil war.
The company now uses these vehicles for profit by providing security services to the highest bidder.

Previous Operations
M.A.D. are known for accepting even the most hazardous jobs that many other private military companies have declined.
Previous operations recorded have been mainly abroad aiding industrial giants or wealthy political figures achieving their endeavours.
Their military staff members and leaders have been accused of many wrongdoings that include murders, torture of prisoners and drugs traffiking.
All charges have been dropped due to lack of evidence or witnesses going missing.
The company has performed small operations for General Janne Gambels before but seems like this conflict in Padasjoki might be their biggest assignment yet.