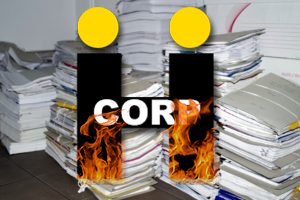 The FFP received a number of documents from which it can be concluded that Hölböcorp is bringing an unit of about 300 soldiers to the area. Among the documents were hotel reservations, auction certificates for real estates in the area, and several hundred copies of travel tickets for flights between SMBGMB-HEL.

As the FFP investigated the matter further, correspondence between General Janne Gambels and a unknown person was found in the documents. In correspondence, Janne expressed concerns about the instability in the Padasjoki area and asked for additional troops to be delivered to the area immediately to stop Hölböcorp’s operations.

The FFP reserved an opportunity for General Janne Gambels to respond to the findings, but Gambels threatened the paper with sanctions if the documents were not immediately destroyed. Gambels later called the editor-in-chief, apologizing for his ill-considered words, however, hoping the editor would send the original documents to Gambels for further examination.

Needless to say, the findings have sparked the so-called wasp nest among large companies in the area. We therefore advise all civilians in the region to prepare for tough times.